For the next week UN House will be illuminated in a glow of orange as the organization continues activities to commemorate 16 Days of Activism to end Gender-based Violence.

The campaign, which commenced on 25 November with the International Day to End Violence Against Women will conclude on 10 December – Human Rights Day.

On the evening of 1 December 2021, officials of Government, including the Honourable Cynthia Forde, J.P., M.P., Minister of People Empowerment and Elder Affairs, heads of United Nation agencies, representatives from the Delegation of the European Union to Barbados, the Eastern Caribbean States, OECS and CARICOM/CARIFORUM, regional institutions and civil society organisations gathered in the foyer of UN House to shine the spotlight on gender-based violence and asked the region to join with the world to “Orange the World: End Violence Against Women and Girls Now! It’s Everyone’s Business!”.

The Spotlight Initiative demonstrates a significant, concerted, and comprehensive investment in gender equality and ending violence to make a transformative difference in the lives of women and girls. VAWG in the Caribbean is one of the most widespread, persistent and devastating human rights violations, and the Caribbean Regional Spotlight Initiative is focused on ending VAWG, Intimate Partner Violence and Family Violence (FV).

The global statistics show that nearly one in three women has experienced physical or sexual violence at least once in her lifetime. In spite of tireless efforts the level of violence against women has remained largely unchanged over the last decade. This was empasized by Tonni Brodber, Representative, UN Women Multi-Country Office – Caribbean during her opening remarks.

"For us in the Caribbean region, the problem of gender-based violence, like everywhere else, is pervasive, we are not unique in this, unfortunately, and the available data portrays a bleak picture, but we can always move from bleakness to the orange to resilience. When we have these kinds of events, sometimes we forget how close to home, this hits for many of us. . . [we’re] not having a talk fest, we're highlighting the fact that we need to have targeted action to deliver for our communities," she stated.

Dr. Carlene Radix, Head of the Human and Social Division at the Organisation of Eastern Caribbean States Commission joined the ceremony virtually to deliver remarks reminding us that “some of our social norms and practices perpetuate sexism, male dominance and privilege and lay a foundation for violence against women.

“And therefore it's clear that we need men to be at the forefront of ending violence. If men can work towards a positive transformation of social norms, take responsibility and hold others accountable, it will help to shift the needle.”

"It is incumbent upon all of us to continue advocating for a violence-free Caribbean. I pledge the support of CARICOM  and wish you a festive holiday season. Beat up the festive drums not our women and girls!"

It was just after 7 p.m. when guests were ushered to the grounds to witness the illumination of the UN’s three-story building,  executed perfectly by Resident Coordinator, Didier Trebucq and Minister Forde. With a flip of a switch the UN House radiated a soft, yet beautiful glow of orange, a symbol of hope that soon gender-based violence, in all its forms, will be eliminated from the lives of women and girls who live with the scourge on a daily, across the world and here in the Caribbean. 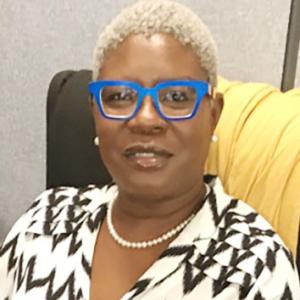