The UN Resident Coordinator in Barbados and the Eastern Caribbean

Working closely with the national governments, the RC and the UNST advocate the interests and mandates of the UN system while drawing on the support and guidance of the entire UN family. The RC aims to bring together the different UN agencies to improve the efficiency and effectiveness of operational activities the Eastern Caribbean region. As UN RC he is also the Designated Official (DO) for Security, responsible for the safety and security of all UN staff and their dependents.

Before joining the UN, Mr. Trebucq worked as Head of Delegation of the French Red Cross in Colombia and Ecuador. Also, he was Administrator of "Medecins Sans Frontieres" in Kyrgyzstan and Tadjikistan and previously worked as an Executive in the private banking sector in France for five years.

Mr. Trebucq is an Economist and holds a Master of Science in Sustainable Development, with specialism in Environmental Economics from Imperial College London (UK) and a Master in Business Administration from the "Institut Français de Gestion" in France. He speaks fluently four languages: French, English, Spanish and Portuguese.

As the highest-ranking representative of the Secretary-General at the country level, the Resident Coordinator leads the UN Sub-Regional Team for Barbados and the Eastern Caribbean, comprising Heads of Agencies of 20 Agencies, Funds and Programmes, to “deliver as one” on the 2030 Agenda for Sustainable Development for all.

System-wide global UN Reform, that became effective January 1, 2019, saw the strategic repositioning of the UN Development System to include the separation of the posts of UN Resident Coordinator and United Nations Development Programme (UNDP) Resident Representative. The General Assembly Resolution 72/279 was geared to make the UN a more relevant and effective partner, through the leadership of an independent and empowered Resident Coordinator, equipped to deliver on the promise of a sustainable future for both people and planet.

Within this context, the Resident Coordinator Office supports joint programming and the coordination of development activities across the UN System, to maximise impact and reduce transaction costs for Governments, in response to national priorities and development challenges. These efforts support of the attainment of the Sustainable Development Goals and other international commitments aimed at "leaving no one behind”.

The Multi-Country Sustainable Development Framework (MSDF) 2017-2021 serves as the framework for articulating the UN’s work in the region.

As a Multi-Country Office, the RCO, through the hub in Barbados, provides coordinated and strategic programming support through five core areas of expertise

In addition, the RCO is staffed with experts in the areas of Human Rights and Disaster Risk Preparedness and Response, along with other critical staff /associates. Effective January 2021, the RCO will have a physical presence in the six OECS countries served by the Mission, with a country coordination officer located in each island, to support the RC and the UN team in providing tailored support and assistance to each country in support of national priorities and implementation of the SDGs. 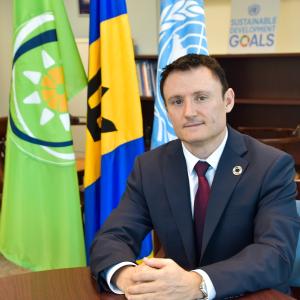